I have already heard some stories about brave Lithuanian partisans as heroes and ‘makers’ of the present-day country that this year celebrates its 100th anniversary. It is still possible to feel some issue or commitment when old men or someone with a certain amount of experience thinks back to what is called the bloodiest guerrilla period in European Baltic States (from 1944 to 1953). These people always underline the fact that, despite what official historians claim, the Second World War did not end in 1945 or at least not for every European country. Lithuania, Latvia, Estonia and Ukraine were forced to realize that one war had been replaced by a new, much bloodier and grinding conflict, lasting from 1944 to at least 1953. Partisans played a fundamental role in what was achieved later, that is the restoration of Lithuania as an independent country. In order to celebrate them and the incredible result they achieved at the cost of their own life, Dzukija National Park promoted an event that occurred on the 15th and 16th of June: two parts and I enjoyed each of them.

On the first day, in the afternoon, Marcinkonys’ ethnographic centre arranged a sort of ‘concert’ in a rural and authentic farmstead. Popular songs and melodies that were created by people from several villages and towns echoed in this fascinating setting and proved that, despite Soviet prohibition and repression, they survived in the memory of Lithuanian people. The performance of some songs provided even some interesting mix of traditional and modern musical instruments as shown in these photos. 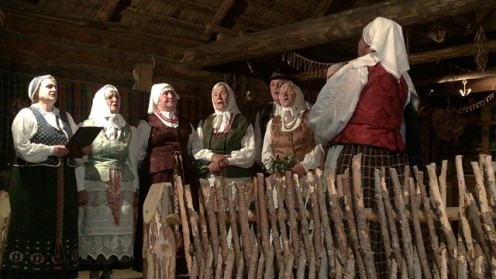 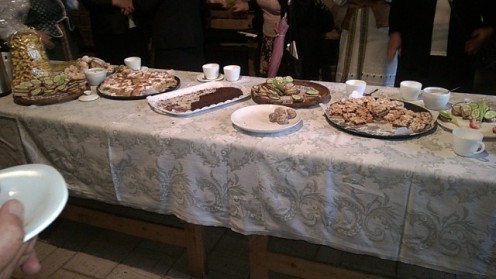 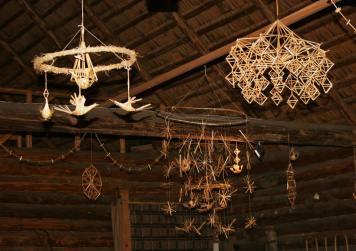 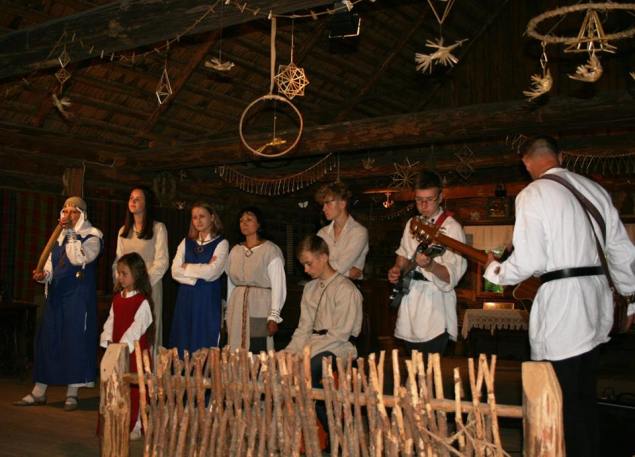 After the concert, a large table with some of the typical Lithuanian courses was waiting for the audience of the concert. Then, such a strong desire of honouring what is part of their cultural heritage and identity made us (I took part too together with two French tourists) take each other hands and burst into involving popular songs.

On the 16th of June, an interesting challenge was waiting for me that is taking part to a pedestrian hike of 22 km on the footsteps of Lithuanian partisans. Here is the map of the whole path. 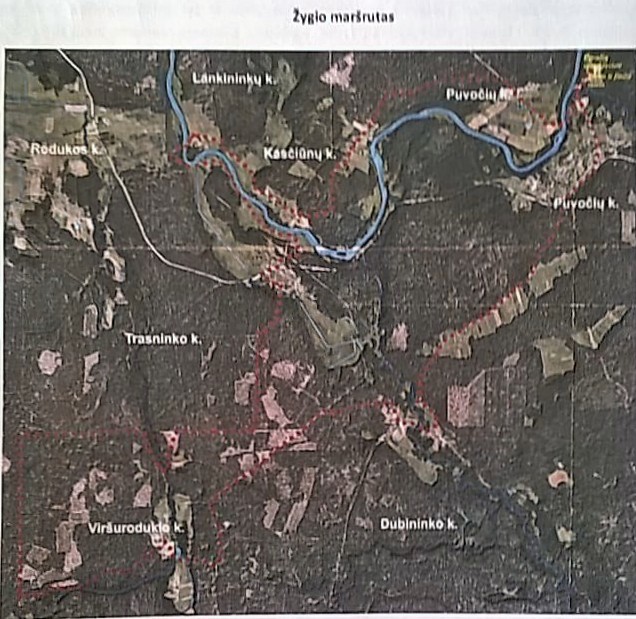 I had this incredible opportunity to walk into the shoes of brave freedom fighters that organized themselves in order to resist political and social changes that the Soviets, also by force of arms, were imposing. I also found myself as the official photographer of this event and, believe it or not, my photos are now on facebook page of Dzukija National Park!!!

The path started in Puvočiai  and precisely alongside the Merkys and Gruda riverside, a perfect place for canoeing as subsequent photos prove ;D. After registration, gathering of all participants and general greetings, it was revealed that a lot of atrocities occurred in this area especially because men refused to enlist in the Soviet army units. In the first half of the 20th century, the village of Puvočiai presented a brick factory, the so-called “Ciegelnio“, which produced resilient bricks to be sold mostly during the Polish occupation. During the Interwar Period, Merkys river also functioned as a real Lithuanian – Polish demarcation line separating Puvočiai village (mostly occupied by Polish people) from other lands. 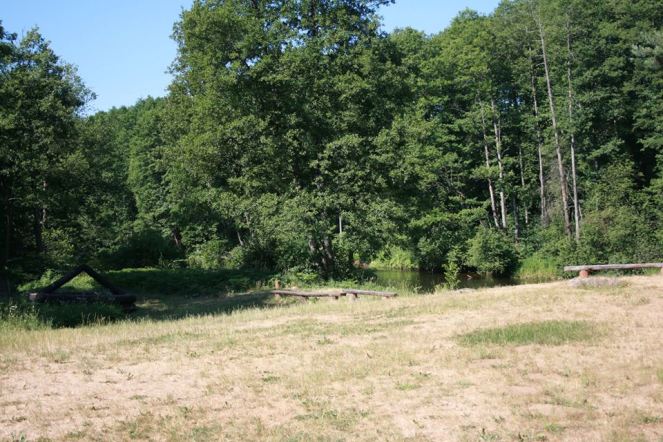 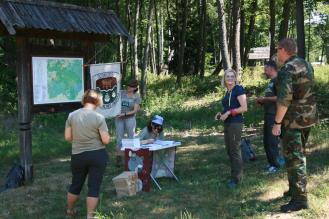 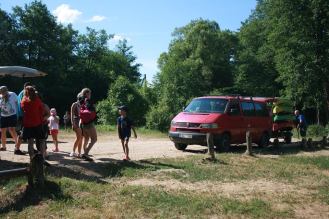 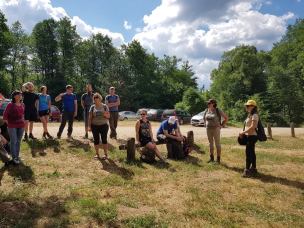 The journey went through the forest, some sandy roads and several stops: some of them were necessary to restore our energy or freshen up our feet (or dogs as it is possible to see in the pictures XD), other stops related the main purpose of the pedestrian hike. In certain villages such as Viršurodukis or Kasčiūnai symbols of guerrilla warfare are still visible. With reference to the first village, a bunker has been restored alongside a place of honor for partisans of the Druskininkai Battalion, led by Commander Juozas Balčius-Balutis. This bunker is a valid example of the many compact hidden installations that were manned by several soldiers and located in deep Lithuanian forests. There was also the possibility of hearing the witness of an old lady whose brother took part to the armed resistance (too bad that I could not understand a thing :P). In Kasčiūnai, another bunker revealed itself under the door of what could be considered in the past as a common underground storage room. Partizan Juozas Jakavonis – Tigras’s farmstead was restored here. 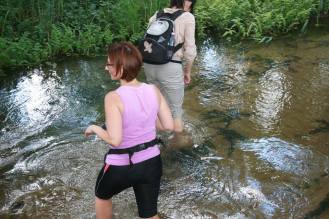 The path went through funny locations too (at least for me XD) like the sunken bridge in Rodukos that goes through Merkis river. I managed to cross it (slightly trembling under my feet XD) and take pictures as well. The path finally led back to Puvočiai where almost everybody decided to have one last great time together as we took a bath in Merkys river. 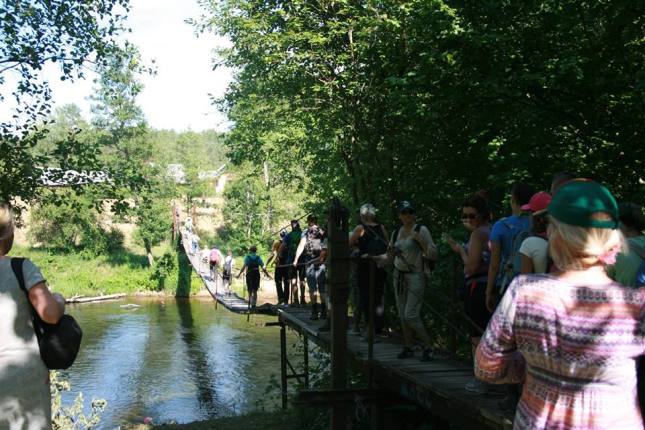 This event was particularly meaningful and interesting for me. It gave me clues to understand even a little the constant need of Lithuanian people to preserve something of their own, that is their national identity. Moreover, I can not forget that I was largely helped by some of the participants that were so friendly and kind as they understood my difficulty with Lithuanian and tried to explain or translate most of the explanations provided all along the path.

In concluding, may I report what is a solemn oath testifying partisans’ strong commitment to the liberation cause (breaking this oath could only lead to misfortune):

*I swear, almighty God, that I will defend the well-being and independence of the Lithuanian nation from all its enemies without fear of death. I will honestly fulfill the orders of the leading Lithuanian partisans and their superiors and I will keep all the secrets that were entrusted with me, I will not tell anything to Lithuania’s enemies and whenever I know something about them I will immediately inform my superiors.

I know that, for the sake of the oath, I am at the risk of capital punishment by God and the court of partisans. So God help me!